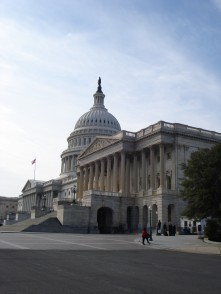 Shawn is 37. He is well traveled, but until last week he had never visited our Nation’s Capital. Having toured a museum or two with him, I was surprised. I knew he would be intrigued and inspired by what he was going to see.

He started thinking about the trip in late January. He had begun doing research on “Catch Shares” and the impact they could have on coastal fisheries, especially those in our area. It was alarming to Shawn and many others. As he can tell you, if you live or work on the Gulf Coast… or anywhere along the 88,000 miles of coastline that encompasses the United States… Catch Shares, IFQs, Bag Limits, and shortened fishing seasons affect you. If you eat fish, they will impact you. If you like to fish, they will affect you.

Shawn is a third generation fisherman. He still relies on the fish of the Gulf of Mexico for his livelihood. There are fewer of some, and there are a surprising abundance of others. In our area, Red Snapper and Amberjack are threatened not by over-fishing, but by laws and limits that are based on faulty science. Ironically, those that write, pass and enforce these laws and regulations know full well how unbalanced the science is. 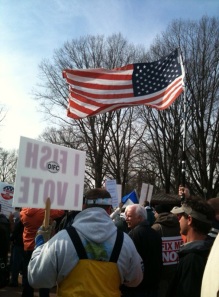 So, when Shawn learned of the rally planned for February 24 in Washington, DC, he made up his mind to go. In the meantime, he wanted to get the word out to as many as possible. He started a grassroots effort of sorts. He created a forum where he could reach as many people as possible on Facebook. The fishermen have a collective voice and it was time for them to be heard.

This Facebook page was given the name Fisherman’s Voice. Linked to it are several other Social Networking sites with the same uniform url, among them: Twitter and YouTube. In the short month from it’s creation (Jan 23rd) until the scheduled trek to Washington, the page grew well beyond Shawn’s circles. By the time he boarded the chartered bus to DC Tuesday morning, Feb 23rd, the Facebook page had a loyal following and over 800 fans. He saw the potential from the start. He shared links. He made posts. He encouraged others to share the page with their friends and family. He let everyone know just how important an issue this is.

The trip to our Nation’s Capital was a milestone for him and his efforts. While on the 18 hour ride he continued to post on the Facebook page. The growth rate increased as fellow fishermen and their families joined the trip… virtually anyway. What followed next, surprised us all. The page gained a life of its own. The fans began posting about their trip to DC. They asked questions. Other fans researched and provided answers while Shawn was on the bus with 30 others headed North. 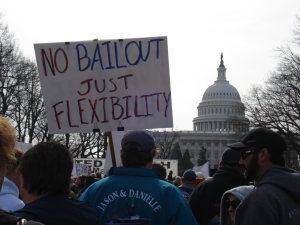 They reached Richmond, VA around 1:00am local time. They got a few hours sleep and set out Wednesday morning to join their fellow fishermen in Washington, DC. By the time they arrived at Union Station, the fan-base had grown to over 1,000. As the small group from Northwest Florida offloaded the bus and began the short walk down Louisiana Avenue, they were joined by literally thousands with the same mindset. Over 5,000 fishermen and their advocates joined their voices together to let Congress know, “I Fish. I Vote.” Their goal was simple… Flexibility in the Magnuson-Stevens Act that was passed in 1996 and implemented in 1997. The Act states that its purpose is “to provide for the conservation and management of the fisheries and for other purposes.”

“Conservation and management” are not points of contention with fishermen. This group is the first to agree that both are necessary for the fisheries to survive. Unfortunately, in the past, when the NMFS (National Marine Fisheries Service) has closed a fishery for overfishing (such as they are threatening to do with Red Snapper) the regulations and restrictions are not eased once replenishment is achieved. (Also, I should point out that this is the “unbalanced science” that I referred to earlier in this post.) Red Snapper are more abundant in the Gulf of Mexico than they have been in 30 years. This is the threat to the other fisheries in the Gulf. 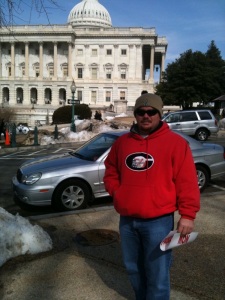 Since his return from the rally, Shawn has not wavered. Quite the contrary. His resolve is stronger than ever. The Fisherman’s Voice is louder. The page continues to grow. “Fans” are posting links, pictures, videos and encouraging one another. They post links to legislation. They explain how to share the information with others. Shawn is right there in the middle. He is keeping the conversation going. Right now, that is so important. The page at the time of this post is approaching 1,500 strong.

Shawn is glad he went to Washington. He plans to go back.

View all posts by Jason Koertge

One thought on “Mr. Youngblood Goes to Washington…”